Vincent E. Rone earned a PhD in musicology from UC Santa Barbara and has taught at universities in New Jersey, Virginia, and Ohio, where he currently teaches music history and theory at Franciscan University of Steubenville. Vincent’s research on the music of religious resistance and protest in 1960s Catholic France has been published by The Journal of Musicological Research and elsewhere. His more recent research focuses on musical traditions that depict the natural and supernatural within film and videogames; his work on The Lord of the Rings films appears in The Journal of Music and the Moving Image, while his work on the Legend of Zelda videogames has appeared on the Ludomusicology Research Group and the Journal of Sound and Music in Games. Vincent co-edited and contributed to Mythopoeic Narrative in The Legend of Zelda, an anthology recently published by Routledge, and currently leads a collaborative project of scholarly essays dedicated to nostalgia and videogame music, forthcoming by Intellect Books. 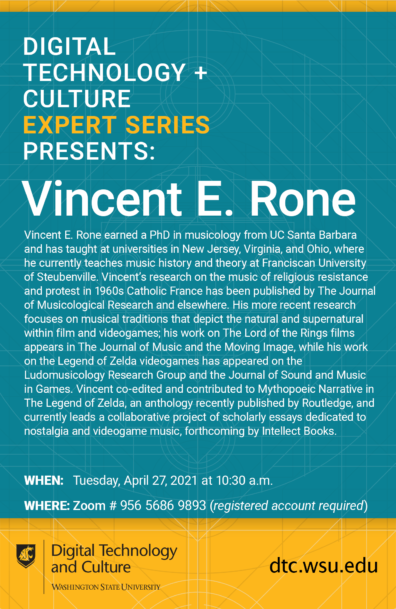