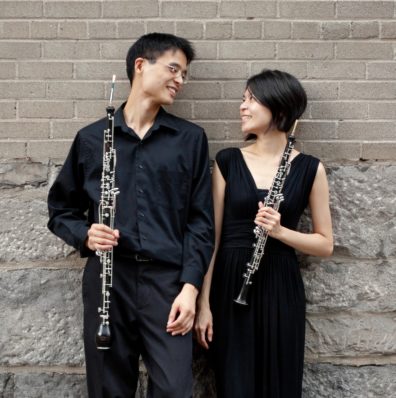 Oboe Duo Agosto was created in 2009 by Ling-Fei Kang, oboe and Charles Huang, oboe and English horn. Advocates of their instrument, they promote its sound and popularity through original and arranged pieces, and newly commissioned works. Audiences have enjoyed their exotic sound combination in music festivals, venues and universities across the United States, in Canada, Brazil, and Asia.

The duo has performed at the International Double Reed and the Asian Double Reed Society Conferences and as the ensemble in residence at the Hartford Women Composers Festival. Their residency at The Banff Centre in Alberta, Canada, featured several commissioned pieces alongside new collaborations with other fellow artists, including the outdoor sound installation for the Convergence Summit on Art and Technology. The most recent project has them exploring a whole new creative dimension with Andrea Clearfield’s Daughter of the Sea, with music and choreography all performed by the duo.

This concert is sponsored by