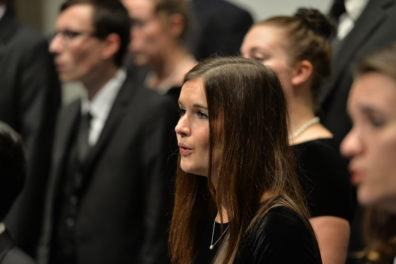 Opening the concert will be the Madrigal Chamber Singers, conducted by Lori Wiest, performing in Renaissance-style costumes.  Their performance of traditional carols and seasonal poetry will include “Gaudete” by Brian Kay and an arrangement of “Deck the Hall” by Edwin Fissinger, and “We Wish You A Merry Christmas.”

The Treble Choir, directed by Dean Luethi, will present several movements from Benjamin Britten’s A Ceremony of Carols and the traditional Hebrew song S’Vivon arranged by Betty Bertaux.

Concert Choir, conducted by Lori Wiest and accompanied by Frankie Bones, will perform “See Amid the Winter’s Snow” arranged by Dan Forrest and “A Christmas Carol” by Tim Laurio.

Tickets will be on sale at the door beginning 45 minutes before the concert.  Prices are $15 general admission, $10 students and senior citizens, and free for children 12 and under.