The WSU School of Music celebrates the season with a holiday concert featuring the WSU Madrigal Singers, Treble Choir, Tenor/Bass Choir, Concert Choir and the Symphony Orchestra.  The concert will include seasonal favorites and conclude with Leroy Anderson’s Christmas Festival, featuring all of the performing groups. Tickets will be on sale at the door beginning 45 minutes before the concert. Prices are $15 general admission, $10 for students and senior citizens, and free for children 12 and under. This concert is family-friendly and the perfect start to the holiday season!

The WSU Madrigal Singers, performing in English Renaissance costumes and directed by Dr. Lori Wiest, will perform the traditional Ukrainian Carol of the Bells, German carol Es ist ein Ros Entsprungen, the Welsh tune Deck the Hall, followed by Softly by British composer Will Todd. They will continue with My Dancing Day by Alice Parker and Robert Shaw and conclude with the ever-popular traditional carol, We Wish You A Merry Christmas. 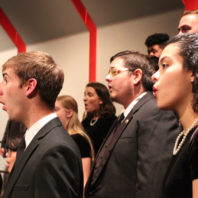 The WSU Concert Choir, conducted by Dr. Wiest, will perform Trinity Te Deum by Eriks Ešenvalds, featuring School of Music faculty on trumpets, trombones, organ, piano and timpani. Jingle, bells, an arrangement by David Willcocks of the popular song, will be followed by a traditional Canadian carol, Huron Carol, arranged by Dan Forrest. They will conclude with Here We Come A-Caroling arranged by Josh Sparkman. Pianist for Concert Choir is Miles Sutton, a graduate student pursuing the MA in Music.

The WSU Tenor/Bass Choir, directed by Dean Luethi, will perform the Spanish carol Riu, Riu, Chiu arranged by Linda Spevacek as well as Michael John Trotta’s contemporary arrangement of the traditional hymn O Come, O Come, Emmanuel. The WSU Treble Choir is directed by Dr. Chris Nakielski, a new faculty member within the Voice/Choral Area in the School of Music. The WSU Symphony Orchestra is under the direction of Dr. Danh Pham.

The WSU Madrigal Singers and Concert Choir will be performing at the Leavenworth Tree Lighting event on Sunday, December 2 at 3pm on the main stage in the center of town. We invite you to celebrate with your fellow Cougs on that day in Leavenworth wearing your cougar-gear and hear our performance there.