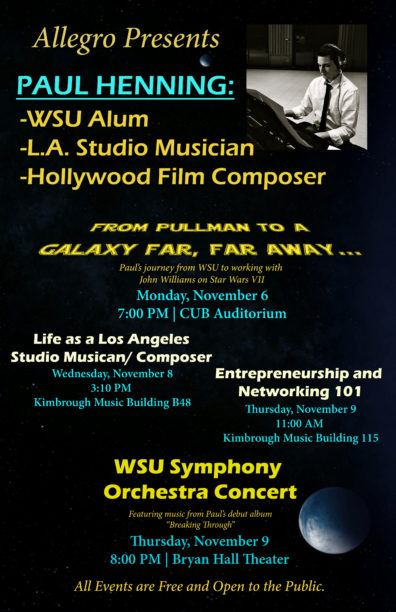 WSU School of Music Alum Paul Henning grew up in Pullman on his family’s wheat farm of 125 years. He is now currently a rising star in Hollywood, writing film music and performing as a studio musician for major motion pictures.

As a violinist, he has performed on the soundtracks for Frozen, Moana, Rogue One, and more. He composed the score for two brand-new documentaries, Clive Davis: The Soundtrack of our Lives, and Foreman. He also had the chance to produce the music score for Star Wars Episode VII, collaborating with John Williams.

On November 6 at 7:00 pm in the CUB Auditorium, Paul Henning will be sharing his inspiring story of his journey from WSU to becoming a successful Hollywood film composer and working with John Williams on Star Wars. Clips of Star Wars Episode VII: The Force Awakens will be shown with commentary by Paul, and there will be a Q&A session afterwards.