Skip to main content Skip to navigation
Thursday, December 3, 2020 - add to calendar 11 am to 12 pm
Online
Join us via Zoom

Combined compression and shear plate impact loading involves impact of two parallel plates inclined relative to their direction of approach. As a result, upon impact, both longitudinal and shear waves are generated in the two plates. Because the longitudinal wave propagates faster than the shear wave, a material element in the plate (sample) is subjected to a stress history consisting of normal loading followed by shear loading. This configuration has several attractive features for material inelasticity studies: (i) the shear wave is a particularly sensitive indicator of the shear response of the material; (ii) the effects of high compressive stress and high plastic shear rates can be examined independently by varying the angle of impact and the projectile velocity; (iii) inelastic response of materials for non-proportional loading paths can be investigated ; and (iv) experimental results can be interpreted rigorously within the frame-work of one-dimensional wave theory. In my talk, I will describe the use of this plate impact configuration to study dynamic material properties in several technologically important materials of particular interest to the engineering community. 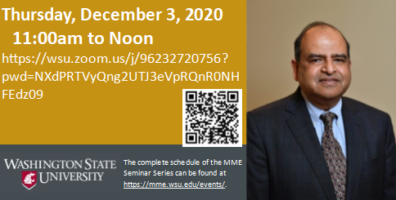