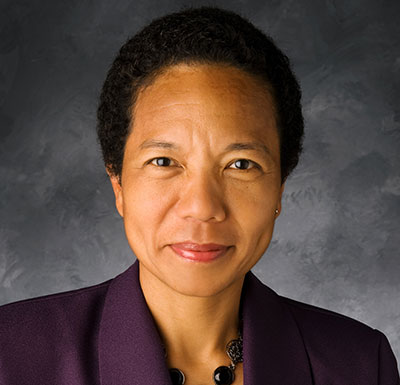 Georgina Dodge, associate provost for diversity, equity, and inclusion at Bucknell University and the university’s chief diversity officer, spoke about the “Impacts of Unconscious Bias on Effective Leadership” during her April 13 keynote address, which was livestreamed to all WSU campuses. She discussed the effects of implicit bias on organizational leadership and pointed out how cognitive errors impede diversity and inclusion. She also offered solutions to mitigate the effects of bias.

At Bucknell, Dodge oversees 4 campus organizations, including the Office of Accessibility Resources; the Office of Civic Engagement; the Griot Institute for Africana Studies; and the Teaching and Learning Center. She also is an adjunct associate professor of English.

Dodge joined Bucknell in 2017 from the University of Iowa where, as chief diversity officer, associate vice president and Title IX coordinator, she helped shape the university’s culture and advocated for the rights of all members of the Iowa community.

Before joining Iowa, Dodge spent 14 years at the Ohio State University, where she provided leadership supporting the success of underrepresented students, faculty, and staff through the Office of Minority Affairs and was assistant vice provost, among other positions, including assistant professor of English.

Dodge also serves on the national board of directors for the Association of Title IX Administrators as well as the board of the Stanley Foundation. She has a Ph.D. in English from UCLA and is an adjunct associate professor of English with scholarly interests in multi-racial literatures, autobiography, and cultural studies. Prior to her academic career, she served a 6-year enlistment in the Navy, working as an electronics technician on communications, radar and meteorological equipment.